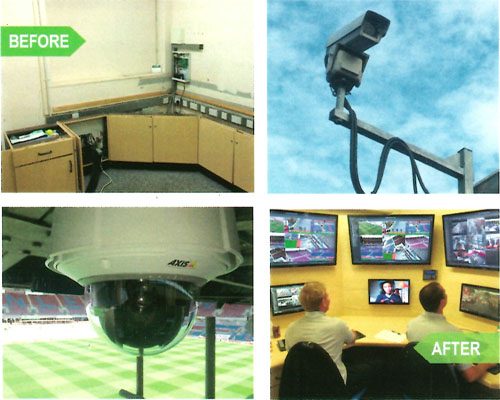 Last year, Thorne Access & Security Ltd was one of a number of companies that was approached by Burnley Football Club’s Stadium and Operation’s Manager, Doug Metcalfe to tender for the installation of a new digital security system and upgrade of the main control room.

An added challenge was the time frame.  What would normally take approximately three months to pitch for, supply and install would have to be completed in a three week period in time for the start of the new season.

Whilst Burnley’s return to the Permier League may not have gone entirely to plan, the performance of the new security system that Thorne installed has exceeded expectations.

Hadrian Thorne, Managing Director at Thorne Access & Security explains “The Club’s old system was antiquated, relying on analogue footage which meant that the images were grainy and the resolution was low.  There were not enough cameras to cover all areas of the ground.  The system was coping with average crowds of around 130,000 each week, but it was definitely not up to Premier League standard.  We supplied and installed an entirely new digital IP system which we were able to network into a new infrastructure installed by Lanway at the same time.  It was a tremendous effort from the installation team to deliver on time and effectively in such a short space of time.”

Thorne Access & Security has worked with Lanway on other big projects.  The two companies are brilliantly matched in their complementary technologies thus ensuring Thorne can offer their clients the ‘total solution’ that is required on a project of this magnitude and importance.

Thorne supplied a bespoke security solution to Burnley Football Stadium; the high definition CCTV cameras cover every single area of the ground.  They have an immediate playback facility which enables the security team to verify and identify anyone causing trouble immediately, as opposed to waiting until after the game.  Footage can be instantly sent to the police to help control anti-social behaviour.

The cameras have a digital zoom capability which produces a phenomenal image quality, which greatly improves the accuracy in identifying offenders.  The system is covered by a comprehensive annual maintenance contract which ensures zero downtime with access to a 24 hour callout facility.  All the equipment is cleaned, checked and tested to ensure full working order is maintained at all times.