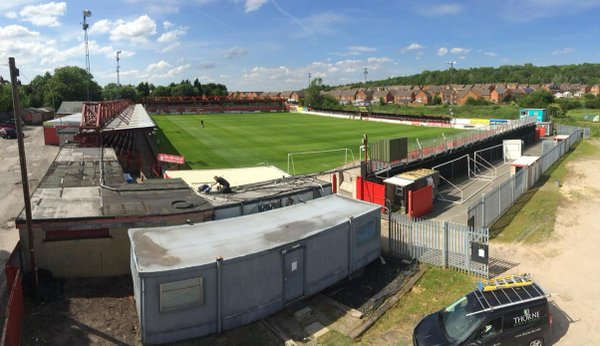 We were drawn against Oxford United at home. A number of Oxford United fans arrived dressed in tweed jackets and flat caps – these are the lads who are more likely to cause problems. One had a holdall containing what was originally thought to be 4 flags. He was taken to the flag positioning area and only put one flag up. As the teams came out, suddenly 3 large flags on poles started waving in the middle of the group. These are big flags- with 10ft plus size poles. How did this happen was my question? At the end of the game, these flag poles were telescopic and folded into poles about 40 centimetres long.  Easily hidden at the bottom of the holdall. We were able to see this when we re-wound our CCTV- We won’t get caught by that again!!!

Just before kick off one of the tweed wearing individuals reached into his pocket and took out a smoke canister about the size of a small coke can. Our eagle-eyed CCTV operator quickly re-wound the Thorne Security and Access CCTV system and we were able to identify lad. Within 6 minutes of the smoke bomb being activated the culprit was at an exit gate passing us his details. He was given the option of telling us who he was or calling the Police.  I spoke to the Oxford GSO an hour later and gave him full details of this individual. Apparently Accrington Stanley has done something that other clubs have not managed to do – identify the culprit. This is as a result of our CCTV system, thanks to Thorne Access & Security.

When Oxford scored their second goal, one chap ran onto the pitch to embrace the player who foolishly in my opinion hand come right up to the wall of the stand. Our CCTV system followed this person who ran onto the pitch him and ejected him. Once again due to the recorded footage I was able to pass his details onto the Oxford GSO. All in all, a challenging day made easier by our great new but not overly expensive CCTV system which was installed efficiently by Thorne.”